It was a beautiful school morning somewhere in Lagos and Chukwuma and his classmates were having one of those ‘if I had a million dollars’ children’s talk. For tiny children in primary one, who hadn’t lifted a finger to work in their lives, they knew a lot of things that a million dollars could get them. “If I had a million dollars I will just buy a race car. I will drive it vroom vroooom!” Otomokpo said, demonstrating how he would drive

“Me, I will just buy a country, I’ll become the queen then I will just send my mummy and daddy to prison any time they beat me, then I will buy a helicopter and flyyyyy around the world…!” Osas said.
“Helicopter ni, Heloplane ko!” After you buy a country, how will you have money for helicopter. Me I will use my money to buy the sun and if anybody wants to see light they will pay me” Malik declared.
“But with the money from my country I can buy 10 Helicopter, the people in my country will pay me money for living in my country.” Osas retorted.
“It will not more be pay you. See this mumu like you. Me I will use my money to buy Father Christmas then I will command him to make plenty toys.” Adaeze declared.
“Who toy don help? me I will use my money to go to heaven. My daddy is a pastor, he said one man, Peter is the gate-man in heaven, if I give him a million dollars he will just let me pass, sharp sharp.” Daniel bragged.
“But all of you know that you don’t have a million dollars abi?” Chukwuma asked.

Finally a voice of reason spoke.
“What is your own self? Did we say we have money?” Otomopo retorted.
“I’m just telling you sha. But I know how you can get everything you want.” Chukwuma declared.
“How?” “uhm, lie lie” “Talk now”
“Father Christmas.” He stated. “My senior brother said that if you write a letter to Father Christmas and you’ve not done any bad thing that year, he will give you everything in your letter”
“So that is why he don’t used to answer me every time!” Adaeze said.
“But I’ve done bad thing this year.” Osas said “My mummy said I am a bad girl.”
“Me too, my mummy caught me as I was about to steal meat from the pot yesterday and she beat me, and then after she left I went back to finish stealing the meat.” Aboki said.
“I know, it is impossible to be very good. But he also said that if you kidnap Father Christmas. He will give you what you want so that you can release him before Christmas, but you must not fail if not you will receive plenty charcoal” Chukwuma continued.
“How can we now, kidnap a whole Father Christmas?” Aboki asked. 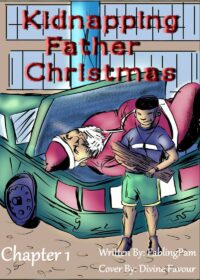